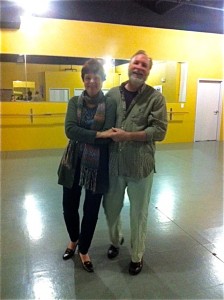 Jim Anderson contacted us at Atlanta Dance Central in August of this year. He wanted to take private ballroom lessons as a surprise for his wife, Stacey, who grew up dancing and loves to get out on the dance floor. Jim says in the past he could never pick up the steps very well and his wife would get frustrated with him – inevitably, they would leave the dance floor. So we started Jim with some basic Swing and Rumba steps, moving at a pace that worked for him. Jim and Stacey had a wedding to attend in September so his plan was to surprise her with his new moves.

Jim told his wife that he was doubling up on his guitar lessons each week, but eventually the cat got out of the bag and Stacey found out he was actually taking dance lessons! Surprised, she attended his last lesson before the wedding and got caught up on the moves that Jim had learned.
After the wedding, Jim and Stacey wanted to keep dancing. They came back and told us that they had a great time at the wedding, and Jim said his wife stayed on the dance floor the whole time with him! What a success – congrats student of the month Jim! He has since learned more Swing and Rumba moves and is doing great!
Previous Post: « Student of the Month: Isabelle Spina!
Next Post: Year in Review from ADC! »