If you haven’t ever heard of the famous jazz teacher Luigi, you’ve missed out on quite an inspirational story.  Luigi has danced among and taught some of the greatest jazz dancers of all time, including Gene Kelly, Fred Astaire, Judy Garland, Michael Kidd, and many more.  In fact, it was Gene Kelly who gave him the nickname Luigi!  Even more fascinating than who he danced with and taught is his inspirational story.  So if you haven’t heard of Luigi, keep reading.

Luigi grew up in a large family, and in his young life danced, acted, sang, and performed in vaudeville theaters.  He was drafted during World War II, and when he returned home he moved to Los Angeles to pursue a movie musical career.  Shortly after he moved to L.A., Luigi was in a fatal car accident, which fractured his skull and caused paralysis down one side of his body.  His doctors said he would never walk again.  During his coma, a voice told Luigi to “never stop moving,” and when he woke up, he was determined to dance again.

In order to rehabilitate himself, Luigi developed stretching exercises that helped him control his body.  He taught himself how it felt to be in correct placement, and after just one year had developed enough strength and control to start attending dance classes.  He then auditioned for “On the Town,” starring Gene Kelley, and got the job!

Luigi continued to create stretches and exercises to keep his body in shape, and to execute while waiting on film sets.  These exercises became popular with the other dancers that were also on set, who would follow along with him.  Eventually he began teaching his own jazz style and jazz classes, all the while maintaining his musical theater career.  Luigi was one of the first people to develop a codified jazz technique, which he has taught all over the world and still teaches today! 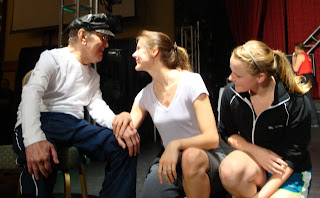 This summer, Ms. Charlotte and Ms. Andrea got a chance to take class from Luigi, and ever since then the Luigi jazz technique has been incorporated in the jazz classes at Atlanta Dance Central.  Luigi’s story is an inspirational one, one that teaches everyone to follow their dreams, and to most importantly never stop moving!